Dublin finished the 2019 Season as the AA State Champions and finished # 3 in the nation in rushing yards with over 6000 yards and averaging 46.2 points per game. 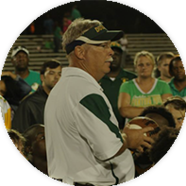