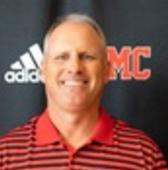 Rob is entering his 18th season at Georgia Military College, and his 14th as the Bulldog’s Defensive Coordinator and Secondary coach.  The GMC Bulldog Defense under his direction has garnered national success.  In 13 seasons, Manchester’s Defenses are consistently ranked as one of the top in the country in rushing, scoring, and total defense while creating an average of nearly 30 turnovers a season.  The 2019 season was no different for the Bulldog Defense, as they finished the season ranked in the top 10 in every statistical category and even posted four shutouts.  During his tenure as Defensive Coordinator, the Bulldog Defense has finished in the top 20 nine times in rush defense, the top 15 seven times in total defense, and have allowed a mere 17 points per game while posting 21 shut-outs.  GMC’s Defenses have created 348 total turnovers (193 Interceptions and 155 Fumbles), and have had 15 individuals earn All-American honors.  The Bulldogs have participated in five post-season bowl games:  The 2007 Pilgrim’s Pride Bowl Classic, 2012 Heart of Texas Bowl, the 2008, 2013 Mississippi Bowl, and the 2015 Graphic Edge Bowl. The 2013 team also played for the 2013 NJCAA National Championship.  Manchester has coached in a total of eight NJCAA bowl games during his tenure at GMC.

Manchester played his collegiate football at the University of Kentucky. He was a four-year-letterman from 1992-1995. He was named UK's Most Valuable Defensive Walk-on in 1994, played on the school's 1993 Peach Bowl team, and was awarded a scholarship prior to his senior season. He was named to the SEC Academic Honor Roll for three straight years before graduating with a degree in secondary education.

Manchester launched his coaching career under Tommy Bowden at Tulane University.  The Green Wave posted a perfect 12-0 record in 1998, including a Conference USA Championship, a win over Brigham Young in the Liberty Bowl, and a final ranking of No. 7 nationally.  That effort followed the squad’s first winning season in 15 years, a 7-4 mark in 1997.  Manchester helped coach the Tulane secondary as a Graduate Assistant, which was instrumental in leading the nation (NCAA) with 26 interceptions in 1997.  In ’98, the Green Wave secondary added 15 more picks.

Manchester returned home as a graduate assistant following his stint at Tulane, coaching the Kentucky defensive linemen in 1999, linebackers in 2000, and cornerbacks in 2001.  He was camp director for two seasons and assisted with the junior varsity squad, serving as defensive coordinator for two seasons and head coach for one season.  Manchester was a member of the staff that helped guide the Wildcats to the 1999 HomePoint.com Music City Bowl.  In addition, he earned his Master of Science degree in sports administration from Kentucky in 2002.

Before landing in Milledgeville, Manchester spent the 2002 season at Louisiana Tech University, serving as a defensive graduate assistant.

Manchester is from Paducah, (Ky.) where he attended Paducah Tilghman High School.  He is married to the former Michelle Bell of Milledgeville, GA.  Rob and Michelle have two daughters, Emery (11) and Ellary (7)