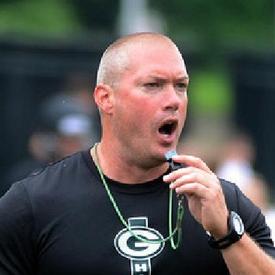 Coach Hetlet has been a defensive coordinator for 26 years. Chad has been a Head Coach for 16 seasons at 3 different schools; he has a career record of 157-33 and has been one of the quickest coaches to reach the 100 win mark in Illinois history. Chad Hetlet became the Head Football coach at Glenbard West in 2007, in that time his teams have gone 139-21, captured 11West Suburban Silver Conference Championships, appeared in 7 State Semi-Final games and three State Championship games, and his team won the State Championship twice in 2012 & 2015. His has been ranked twice in the top 25 by the USA Today, #20 in 2012 and #24 in 2015. Chad has been asked to speak all over the Country on his 3-3 defense at numerous Colleges and football clinics.