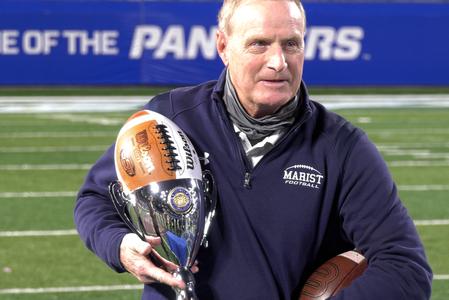 Coach Alan Chadwick joined the Marist Football staff in 1976 as Offensive Coordinator under Head Coach Dean Hargis.  In 1985, he was named Head Coach and the 2021 season marked his 37th year in charge of the War Eagle program, the longest serving Head Coach in Marist School history.

Marist played its first football game in 1903 and has recorded 747 wins (through 2021 season) making it the 4th winningest program in the state of Georgia with an 80%+ overall winning percentage.

Leading the War Eagles, Coach Chadwick has compiled an 409-75-0 (84.5%) overall record, making him the winningest football coach in school history, in both number of victories and winning percentage.  He ranks 2nd among all Georgia high school football coaches in wins.  He led Marist to the AAA State Championship in 1989 and AAAA titles in 2003 and 2020.  The War Eagles have qualified for the State Playoffs every season under Coach Chadwick, the longest consecutive streak in Georgia.